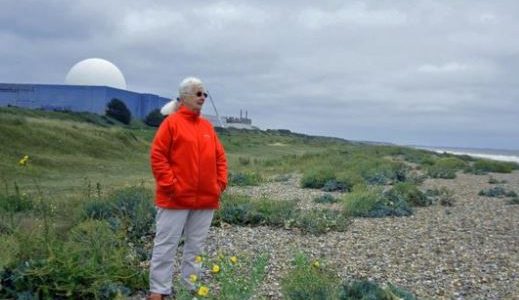 This article has been copied from the BBC website on July 07 2019 . A link to the original is here

Joan Girling has been fighting the nuclear industry most of her adult life.

She was at school when the new Magnox reactor was begun on the Suffolk coast at Sizewell in the 1960s.

Her father told her it was a “necessary evil”.

But when she moved to Leiston, just a few miles from the nuclear power station, and work began on Sizewell B in the 1980s, she could no longer ignore it.

“The traffic and the noise was so bad… I had to move house to the other side of Leiston. I had three children. I couldn’t let them be exposed to that,”

Then in 1989 the Central Electricity Generating Board (CEGB) proposed a Sizewell C and Joan decided she had to do something.

At a fractious meeting at the Leiston Film Theatre in the High Street opposite the fish and chip shop, she founded Community Against Sizewell C.

Joan and an array of other anti-nuclear groups won that fight. Sizewell C was cancelled. The plan was resurrected in 1993 and Joan helped fight and win that one as a local councillor. But she has no illusions about what swung the argument.

“It was the finances that didn’t work out for them, ” she says resignedly. “Not the environment. It’s always finance that has the final say.”

Joan picks her way along what botanists call the “vegetative shingle” that lies on the beach in front of the Sizewell dome, and spots plants like one might spot old friends: “There’s Sea Campion, and Lady’s Bedstraw. There’s Sea Kale and Sea Holly. That one there is a sedum. The Sea Pea, that lives further up the beach.”

The CEGB is now long gone. Today it is the giant French energy group EDF who wants to build Sizewell C. The protestors now call themselves Together Against Sizewell C (TASC).

In the next few weeks the plans will go to the Planning Inspectorate and then on to Secretary of State. If it is approved Joan expects ten years or more of construction, millions of tonnes of aggregate roaring in by road or rail, spoil heaps and a campus of more than 6,000 workers, on what she calls “my beloved coast.”

“Look at the pictures of Hinkley Point in Somerset. Look at that mess. I don’t want that here,” she says

In the 1980s, while Joan was campaigning against Sizewell B, Jim Crawford was starting his career at Torness nuclear power station. Today he is EDF’s Project Development Director at Sizewell. Nuclear is almost as much a part of him as his Glaswegian accent.

While Joan talks of Fukushima, of Chernobyl, of the cracks and mishaps in France’s Flamanville plant, wall after wall of Jim’s offices carry posters proclaiming EDF’s relentless pursuit of safety.

For Jim, the nuclear argument is one of necessity. Coal is being phased out by 2025. If we are to meet the zero-carbon emissions target by 2050, gas will have to be cut as well. Half our aging nuclear capacity is going to be decommissioned by the end of the next decade.

Meanwhile, we will need more electricity not less, as the economy demands more electricity for data centres, cars, trains, even, some believe, planes. Renewables will not be enough says EDF.

As for the cost, Mr Crawford says duplication is the key: “For the first time the UK has an opportunity to build a fleet of Pressurised Water Reactors, all of them the same.

“If, in a few years, you were to go into the turbine hall at Sizewell or Hinckley you shouldn’t be able to know which one you’re in. That brings down costs, spare parts, training, maintenance and minimises regulatory approval.”

A proven duplicated design should mean less risk to investors, which in turn brings down the cost of borrowed money, arguably the biggest cost of all: while Hinckley Point pays its investors 9% interest, Sizewell, hopes to borrow at 5-6%. That’s a lot less when you’re borrowing billions.

Sizewell and Hinckley would then be a blueprint for a nuclear future.

Joan sighs at the thought: “No, nuclear plant, never, not one, has come in on time and on budget.”

Sizewell is hemmed in with every kind of protected area. Philip Ridley, Head of Planning and Coastal Management at East Suffolk Council, admits: “If you were looking for a place to build a nuclear power station you could not have chosen a more environmentally sensitive spot.”

The whole coast is an Area of Outstanding Natural Beauty (AONB). The shingle beach is a Site of Special Scientific Interest (SSSI). Sizewell Marshes, just behind the plant is a Special Protected Area (SPA). The Leiston Sandlings to the south are another SPA. There’s even an ancient monument nearby, Leiston Abbey.

But Mr Ridley believes a compromise can be reached. After all, there are thousands of jobs, local supply chains, skills and training that will all follow in Sizewell C’s wake.

But it is hard to compromise on Minsmere, a Special Area of Conservation (SAC) and an SSSI. The thousand hectares of marsh, less than a mile to the north, is the pride of the RSPB, where in 1947 the avocet, now the emblem of the charity, started breeding again for the first time in 100 years. It is home to 5,800 plant and animal species, marsh harriers, otters, water voles and bearded tits.

Adam Rowlands, Minsmere senior site manager, says: “For the RSPB, the scale of risk is higher than anything else we have ever been faced with before.

“The proposed footprint extends into the marshes behind the site which is managed by the Suffolk Wildlife Trust, and we are concerned at the loss of habitat over the ten years of construction due to noise and light and disturbances, and also the effects on the water table.”

At the moment Minsmere’s water levels are delicately controlled by sluices. Mr Rowlands says any unexpected rise or fall of a few centimetres could flood nests and destroy habitats.

It’s not just the fresh water inland but the salt water of the North Sea that worries the RSPB.

It is an unpredictable and mobile coastline. The RSPB fears that higher sea defences and a concrete landing strip for barges could drastically alter the shoreline – and Minsmere

In response EDF has issued lengthy consultation papers. The local Suffolk Wildlife Trust’s response to the latest and most detailed one is littered with references to “inadequate assessment”.

What’s more, there are fears EDF will only release a full assessment immediately before the plans go before the Planning Inspectorate, giving local groups little time to respond.

Jim Crawford insists the whole process is one of constant negotiation:

“Don’t imagine we are going to keep everything quiet, say nothing and then at the last minute go ta-da! and surprise everyone. No. This is a process of continual negotiation and talking.”