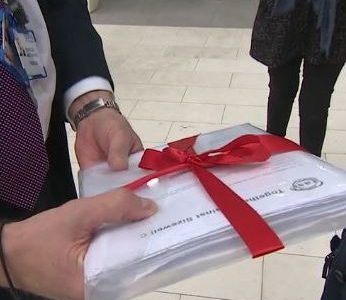 Protestors and two Suffolk councils joined forces in calling for more information from EDF on its proposals to build a new multi-million pound nuclear power plant at Sizewell.

TASC members with placards and banners went to show their opposition to EDF’s current proposals at a council cabinet meeting during which Suffolk County Council and Suffolk Coastal District Council’s suggested that the Sizewell C plans are s lacking on detail and not considerate of local resident’s priorities.

TASC delivered a 1,500-strong petition to SCC leader Matthew Hicks. The petition was sent to SCC to ensure that councillors are aware that opposition to the proposed development is on the increase and that the council has a responsibility to take into account the negative and widespread social and environmental impacts the construction will bring.

A recent joint statement by SCDC and SCC indicates that while they remain in favour of the development ‘in principle’ but that neither authority can support Sizewell C given the present lack of information presented by EdF regarding how the putative benefits of the development will outweigh the ‘impacts on people and the environment’.

Pete Wilkinson, TASC’s chairperson, said today, ‘The case against Sizewell C is overwhelming. The development will force ten to twelve years of crippling social and environmental disruption on the county, particularly in the east but its effects will be felt across the county. It will fundamentally change the way of life in this region, cause people to lose their homes, destroy an area of outstanding natural beauty and leave us with another legacy of lethal radioactive waste which future generations will be required to manage while having derived no benefit. The need for new nuclear plants to meet our climate change, cost and electricity demands has been repeatedly shown to be false. Are we really prepared to turn this heritage coast from one of beauty, tranquillity, tourism and sustainability into an urbanised de facto nuclear waste store for centuries to come for the sake of electricity which we will not need by the time it begins to be generated and which can in any case be met by conservation, efficiency and decentralised means of production? We do not want our rural communities to become an urban nightmare of transport, noise, dust and disruption and neither do a growing number of people in the region. We turn to our politicians to ensure that sense prevails.’

‘We, the undersigned, strongly oppose the plan by EDFE to construct 2 new Nuclear reactors at Sizewell in Suffolk. The destruction of AONB (Area of Outstanding Natural Beauty), SSSI sites (Site of Special Scientific Interest) and the proximity to Minsmere bird reserve, all on our crumbling Suffolk coastline, is totally unacceptable. A government-backed programme of energy saving and clean renewable energy would combat climate change and avoid the risks of a catastrophic accident, dangers to health and the storage of highly radioactive waste at Sizewell for many years to come. SAY NO TO SIZEWELL C.’

In a three-hour cabinet meeting, the councillors voiced their dissatisfaction over missing feasibility studies and plans for buildings set to permanently disturb Areas of Outstanding Natural Beauty (AONB).

The stage three consultation by EDF on the current plans concludes on March 29th.