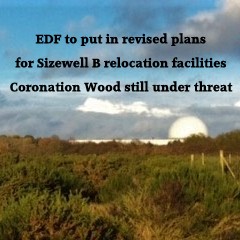 To stop the needless destruction of Coronation Wood, TASC supporter Joan Girling applies to Court of Appeal for permission to proceed with case against EDF’s premature development in readiness for the Sizewell C Development which may or may not go ahead

TASC are pleased to advise our many supporters that we are continuing the legal action to prevent the destruction of Coronation Wood and Pill Box Field as part of premature building works in preparation for a possible Sizewell C development. The original challenge, brought by TASC supporter Joan Girling, called for a judicial review of the decision by East Suffolk Council in Sept 2019 to grant planning permission to the giant French energy company, EdF, to, amongst other things, cut down the 100 year-old Coronation Wood to create space for the Sizewell C nuclear development. The Judicial Review hearing took place in the High Court on 8th September 2020 with the decision dismissing the judicial review application being handed down on 1st October.

After discussions with our legal team and being mindful of the strong feeling against this development in the local community, TASC has decided to support an application to the Court of Appeal for permission to appeal the High Court ruling. Papers were served on 21st October regarding both grounds that were dismissed at the High Court hearing.

Joan Girling said, ‘‘The Planning Inspectorate has now accepted EdF’s recently submitted Sizewell C DCO application. However, it remains our view that permission for Sizewell C is not a foregone conclusion. There is no certainty that it will be given approval. Until such time that the Sizewell C application is determined, it is the view of many people that the needless destruction of Coronation Wood should not go ahead. EdF have already started scoping for plans to change the development of the Sizewell B Relocation facilities and also announced that they will be consulting on major changes to the Sizewell C planning application just a couple of weeks after the local communities submitted their views on EdF’s original plans. TASC and I feel we must do all we can to prevent the destruction of the entire historic wood, its trees and valuable wildlife which will be lost as EdF cause yet more industrialisation of the Sizewell landscape and AONB.”

Chris Wilson, TASC Press Officer, said, “TASC is determined to ensure we leave no stone unturned in this legal process, in order to require that East Suffolk Council answer for their woeful disregard to the views of the local community when approving EdF’s premature plans to expand their nuclear complex further into Suffolk Coast and Heaths AONB, destroying Coronation Wood and Pillbox Field in the process. TASC remain indebted to Joan Girling for continuing with this case.”

TASC extend our sincere gratitude to all the individuals who responded so generously to the crowd-funding for this case to date. The fundraising will now be resumed to help fund continued support for Joan in her challenge through the Court of Appeal. Details can be found at the following link: https://www.crowdjustice.com/case/save-coronation-wood/

Erin Alcock and Rowan Smith from Leigh Day, who represent Joan Girling said: “we are pleased to be able to support Joan with her judicial review challenge. It is crucial at a time of climate catastrophe that proper lawful process is followed by local authority decision makers when valuable green space and natural habitats are at stake. We look forward to working with Joan to progress her case further.”