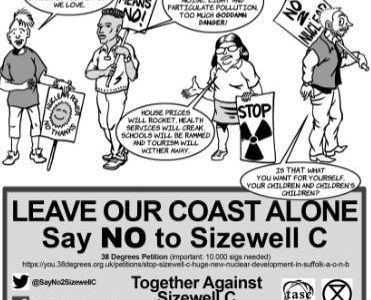 Together Against Sizewell C

TASC points out that:

Pete Wilkinson, TASC Chairman, said today, ‘We have to accept the reality that such a ridiculously inappropriate application has made it through the first hurdle, however improbable that is.  But we now have to unite with other opposition groups and individuals in the area to produce evidence to show that to such a white elephant development at Sizewell is not only without the interests of the county, its people and environment but that it is also nonsense in a planning sense.  To plant a huge, dangerous nuclear station of untried design in the middle of a community, to store its lethal spent fuel on site for at least 140 years and to acknowledge that within that time, the site will flood is some sort of madness.  If there is any sense of proportion and reason left in the UK or in this government, it will be laughed out of court.’