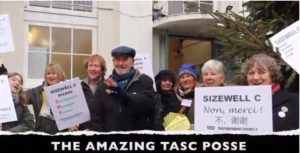 TASC has a stalwart core of supporters but we need more help!

Over the last few years TASC has held many fundraising events including an Art exhibition, Pop-up shops and Public Talks. We hosted Jonathon Porritt’s talk The Nuclear Option: Wrong Technology, Wrong Time, Wrong Place and a visit from Japanese anti-nuclear activist Kazuhiko Kobayashi  who explained how the Fukushima disaster of 2011 remains a real threat to local Japanese citizens as well as to the global community. The film ‘The French Nuclear Trap‘ proved a huge success and was seen by over 500 people.

We have representation at NFLA events and regularly attend Government meetings with BEIS and the ONR. We work alongside other NGOs in the area and across the country.

After a long wait, early in January 2019, EDF launched the Stage 3 Consultation swiftly followed 6 months later by the Stage 4 Consultation.

Our hardy bunch of supporters battled through cold, wind and snow flurries early last year and a heatwave in July. We handed out leaflets, engaged with the public and often found ourselves offering emotional support to the many angry, genuinely upset folk that came along to ask questions of EDF, leaving with few answers.

With the DCO submitted for scrutiny by The Planning Inspectorate we can only hope they will throw out this devastating application and Suffolk can rest in peace.

We need help, your help, to read documents, write to local councillors, your MP, and the Government.

As many of you know Joan Girling has been successful in her bid to take East Suffolk Council to Judicial Revue and TASC are supporting the case all the way. Please support our fundraising page at Crowd Justice.

We hold weekly ZOOM committee meetings and please watch out for our monthly supporters update on Zoom.

Please go to our Contact Page to join TASC and help us with the fight against Sizewell C.