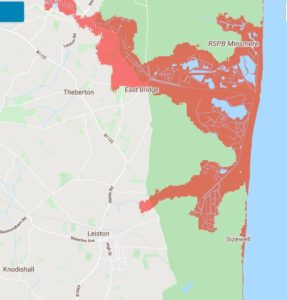 The map above reproduced from Climate Central shows the flood risk around the Sizewell plants at 1.2 mtrs

In 2009 scientists warned that rising sea levels, triggered by global warming, pose a far greater danger to the planet than was previously estimated. There is now a major risk that many coastal areas around the world will be inundated by the end of the century because Antarctic and Greenland ice sheets are melting faster than previously estimated.1

According to a report by the Centre for Environmental Policy at the Imperial College London, the rising sea levels could lead to extensive flooding around the coast of East Anglia. Storm surge heights with a 50 year return interval are predicted to reach heights of over 410cm OD by the end of the 21st century, and it is likely that 100 year return period events will occur every 20 years by 2050.2

The coastline around Sizewell is very dynamic and it is difficult to precisely predict its future behaviour. It is known that vast volumes of deposits, such as those that make up the coast at Sizewell, can be moved in a single storm surge. For example, it was estimated that 30.000m3 of material was moved at the Scott Head when the dunes were cut back by 20m during the 1978 storm surge.3

According to Dr Colin Brown, director of engineering at the Institution of Mechanical Engineering:

“…Sizewell will certainly be affected by rising sea levels. Engineers say they can build concrete walls that will keep out the water throughout the working lives of these new plants. But that is not enough. Nuclear plants may operate for 50 years, but it could take hundreds of years to decommission them. By that time, who knows what sea-level rises and what kinds of inundations the country will be experiencing?”4

Although it is noted in the Sizewell C stage 1 environmental report that coastal erosion is a problem and that extra sea defences will be necessary, there are no examples of how this might be achieved, or any assessment of the affects (social, economic and environmental) on the local area of Sizewell These possible affects need to be studied and quantified before any benefits of the power station can be weighed against the possible loss of homes, businesses and agricultural land as well as the natural environment including Minsmere and the Sizewell AONB. In mitigating any degradation of the shore defences at Sizewell there has been no data presented to show what effect these would have on the adjoining coastline either. Currently the erosion of areas to the north of Sizewell provides material which is naturally transported south along the coast to provide protection for both Sizewell and further south to Thorpeness. Any disruption to this natural process to provide protection for the power stations would necessarily decrease the protection to the south. It has been noted by several local residents that the Thorpeness area which has been relatively stable recently has undergone increased erosion, and increased sea defences have been put in place. EDF are apparently confident that the calculations, for the design for Sizewell C, will ensure it is sufficiently robust to withstand storm surge levels, therefore they should perhaps be able to also give some indication of the costs and consequences of various flood mitigation measures, given that they have had several years within which to study the coastline. It is difficult to have a meaningful consultation without first being given any sort of clue what we may be faced with at Sizewell.

“The Sizewell frontage incorporates a soft shore flood defence. There are two lines of embankment (in general appearance, vegetated dunes) fronting the Sizewell C Site which, properly maintained, comprise the flood defences. The 10m high embankment fronting the B site has an internal structure but the 5m high embankment does not. The design concept is that the 5m structure will collapse into the beach and thus mitigate erosion influences on the 10m structure during extreme storm events.”5

It is unclear whether the 5m structure, once collapsed, would be built up again, or whether it is assumed that only one such extreme storm event will take place during the lifetime of radioactive material being stored at the site. If the 5m structure collapses then it will no longer be there to mitigate future erosion influences on the 10m structure.

The consultation documents published by EDF do not appear to contain any discussion of who might pay for the flood defences. If areas around Sizewell are allowed to be breached in order to lessen the impact of flooding at the Nuclear Power Stations themselves, it is unclear whether homes and businesses will be compensated for their loss by EDF, the government or insurance or whether they will be expected to cover the costs personally. If EDF have factored in a contingency for flood defences, then they should be able to give an indication of precisely what this will cover. If they have not made decisions on what will be paid for, it is difficult to assess how the government and EDF will reach the strike price for nuclear power which is set to be announced imminently.

Featured image for this page by Fran Crowe   –   This information is also available in our leaflet.