On July 9, 2020, the Court of Auditors published an extremely severe report on the EPR sector. It returns to the long list of problems responsible for the delays and additional costs of the Flamanville site and the other reactors under construction. Above all, it questions the advisability of relaunching a new nuclear fleet, calling on the State to wonder if other options for producing electricity are not more relevant and cheaper. 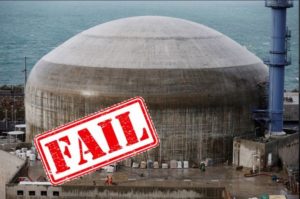 A look back at a large-scale fiasco

At the origin of the industrial disaster, the Court of Auditors first pointed out the complexity of carrying the EPR. Initially conceived as a Franco-German project, this reactor was then carried by both EDF and Areva, both of which wanted to build and sell this reactor abroad, each favouring a different economic model. The rivalry between the two companies will lead to a bidding up and headlong rush, each showing disproportionate confidence in their abilities. A first EPR will be sold by Areva to Finland in 2003, while EDF, a few years later, will launch the Flamanville site.

This blind confidence will lead them to underestimate the duration and cost of building reactors. This will result in strong pressure to meet constrained deadlines, at the risk of rushing things … and thus falling behind. Supposed to last 54 months, the construction of the Flamanville EPR is currently estimated at 157 months. Instead of the 5 million hours of engineering work, it will take 22 million.

Concerning the Flamanville EPR, the Court of Auditors also noted faulty project management and inadequate organization between EDF, Areva and their subcontractors, and a failure to take into account the many alerts concerning the difficulties encountered. EDF did not care whether the skills necessary for its design were there. While a certain number of parts were supposed to present a quality such that their breakage would be excluded, the expected high level of safety was not met, the requirements not being transmitted to the manufacturers. The information on these faults was only transmitted to the Nuclear Safety Authority with a delay, whether it was the vessel fault or those on the welds in the secondary circuit.

For the Court of Auditors, these multiple defects also pose a significant risk to the entire sector. EDF’s ongoing or potential claims against Areva SA (the company responsible for completing the Olkiuoto EPR site in Finland) are such that the latter’s failure cannot be ruled out.The risks of litigation by EDF against Framatome could also weaken the company. The Court emphasises that the State (which owns 100% of Areva SA) has provided substantial financial support to companies in the sector and condemns the fact that it remained a spectator, without intervening while the problems were piling up, or attempting to arbitrate between them.

The Court of Auditors reassesses the cost of the EPR

However, according to the Court of Auditors, in order to have a good estimate of what the reactor will have cost in 2023, the year scheduled for its start-up, it would be advisable to add to this sum “additional costs” amounting to 6.7. billion euros, including more than 4 billion in financial expenses. This would bring the total cost of the reactor to 19.1 billion euros!

The Court also notes that EDF, from December 2008, stopped calculating the cost of producing electricity for the EPR. Proceeding with its own estimates, it estimates that this one will border … 110 to 120 € per MWh.

By way of comparison, Ademe estimates that the production cost of onshore wind power in 2018 was between € 50 and € 71 per MWh.

What are the prospects for the construction of new reactors, in France and abroad?

The Court of Auditors notes that all EPR projects and sites around the world have given rise to delays and additional costs, leading to risks for the companies concerned. The one in Olkiluoto, Finland, partly provided by Areva, is still not completed and has seen its initial costs almost quadrupled, to 8.2 billion euros. Those at Hinkley Point, in Great Britain, pose a high risk to EDF, which will have to pay at least 16 to 17 billion euros for its two reactors. The two Taishan reactors, the only ones to have entered service so far, have a delay of 5 years and 60% additional costs. The Court noted that EDF no longer had the capacity to finance new EPRs at Sizewell, in Great Britain, and that the 6 EPR project in Jaipur, in India, still did not materialise.

The current EPR being definitively unsaleable, EDF now offers “EPR 2”, supposed to be more economical (which the Court of Auditors doubts). For several years, EDF has been pushing for the construction of three pairs of these “EPR 2” in France, for an amount of 46 billion euros. But the Court of Auditors believes that EDF will not be able to finance the construction alone, and that a form of public guarantee will be necessary. For her, putting this cost at the expense of taxpayers and consumers clearly poses a question and would only be justified if the competitiveness of nuclear power compared to other means of electricity production is clearly demonstrated, which is far from guaranteed! She cites the latest World Nuclear Industry Status Report, which clearly documents the loss of competitiveness of nuclear power compared to renewables. It also mentions a study by Ademe which concludes that the construction of a new nuclear program would represent a significant additional cost.

In the end, it recommends avoiding a “hasty” decision concerning the renewal of the nuclear fleet and initiating an in-depth analysis of the forecasts on the electricity mix, taking into account the cost of the various options, security of supply, management of radioactive waste that will be produced, etc. It’s hard to imagine that nuclear power can come out on top.

What a waste of time …

It is beneficial that a body as important as the Court of Auditors should finally look into the subject. But shouldn’t such an analysis have taken place much earlier, avoiding such waste?

Already in 2006, the Alternating Current study for the Great West tried to quantify what it would have been possible to achieve with the 3.3 billion euros that the EPR would then cost if they were invested in energy savings and renewable energies in the West. Conclusion: we could have obtained a capacity to meet electricity needs twice as high (by adding the consumption avoided to the electricity produced), while creating 15 times more jobs.

In the meantime, the cost of the EPR has skyrocketed as the cost of renewables continued to drop, and the “low-carbon” electricity supposed to be produced by the reactor is still not there. Renewable energy specialists do not hesitate to point out:

If the construction of a new nuclear park is not economically justified, it would also constitute a colossal waste of time in view of the climate emergency. In view of the duration of construction of the new reactors, such a project would clearly be out of time. While the decision on the renewal of the park is (officially) postponed until after the presidential election, let’s hope that a next government will have the wisdom to renounce this aberration, to protect both the climate and the state budget.