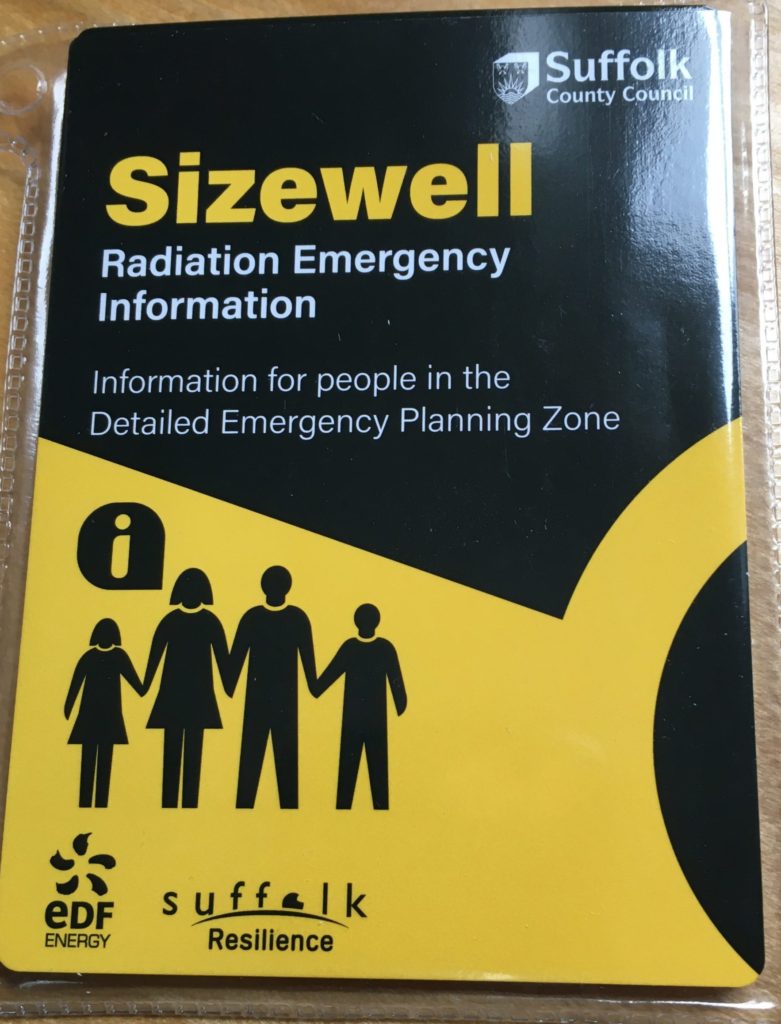 Accidents at nuclear power stations have occurred regularly. Most go unreported, but occasionally, the accident is of such magnitude that it affects large area around the stricken plant.  Sometimes, the effect is global:  we are still suffering from the effects of the Fukushima accident in 2011 as it continues to leak radioactive waste into the Pacific and the effects of Chernobyl still require restrictions in European countries 34 years after the accident. In the UK, the consequences of the notorious Windscale Fire in 1957 when the ‘piles’ of the prototype plant caught fire, were, at the time, ‘dealt with’ as the authorities would have you believe, by the discarding of a few million gallons of milk produced locally.  In fact, later assessments concluded that the radioactive cloud from the plant exposed thousands of people to radiation doses which had unknown effects on health.  Estimates are that between 12 and 240 people would have died as a result of that exposure and an unknown number of long term, non-fatal cancers and genetic effects would have resulted.

At Sizewell, the A plant operated as far as we know without problems for its 40-year lifetime. There were a few scares, notably the crack in a plastic cooling pipe which allowed 40,000 gallons of contaminated water to leak into the laundry room.  It was only discovered by accident.  The management discharged the water to sea, transferring a site-based problem to the commons of the environment.

The entire emergency planning for dealing with the consequences of a major accident or terrorist incident at Sizewell is based on the premise that it is highly unlikely ever to happen and if it did, arrangements for the evacuation of people in the area would swing into action smoothly and remove people from the danger area to places of safety.  So sure, are the authorities that a Fukushima or Chernobyl type accident will not occur at Sizewell, they ask the operators themselves – Electricite de France – to assess the ‘worst credible accident’ that could occur.  This assessment is then basically rubber-stamped by the regulator, the Office of Nuclear Regulation (ONR) and the local authority, Suffolk County Council, then determines the ‘resilience’ plan to cope with the radioactive fall-out that EDF predict.  This practice of asking the operator to assess the accident potential from its own plant has an inbuilt flaw which feeds the cynicism of those who oppose nuclear power:  it is unlikely that EDF will contemplate a terrorist strike on, let’s say, the spent nuclear fuel store, as credible and will therefore tend to dismiss scenarios which predict widespread contamination as occurred at Fukushima.  The argument is that such events are highly unlikely and, in any case, Fukushima was caused by a tsunami and we do not have them here in the UK.  What this defence ignores is that all major accident – Three Mile Island, Chernobyl, Fukushima and Windscale – were initiated by unforeseen conditions.  The next accident will inevitably be caused by unforeseen circumstances for which we cannot legislate.

In the wake of the Fukushima disaster, all nuclear plants around the world were required to review their emergency plans.  Two international bodies, The Heads of European Radiological Protection Competent Authorities (HERCA) and Western European Nuclear regulators Association (WENRA), made recommendation that evacuation plans should be prepared up to 5km (3.1 miles) around nuclear power sites and that the provision of ‘stable iodine tablets’ – which protect the thyroid gland from radioactive iodine  – together with appropriate ‘sheltering’ facilities (to reduce exposure to radiation) should be available in the area up to 20km (12.4 mile) from the site.

After much debate, argument and criticism of the manner in which the plans in the UK were reviewed, we have arrived, at Sizewell with the following:

The Radiation (Emergency Preparedness and Public Information) Regulations (REPPIR) require five distinct ‘zones’ in which protection has to be available:

Zone 1: 1.35km zone – shelter and stable iodine has to be available within 1 hour of the event.

Zone 2: 3 – 4km Detailed Emergency Planning Zone (DEPZ) – in which ‘response action to deliver automatic public protection’ must be made available.

Zone 3: 4km – identified as an evacuation zone after 10 – 12 hours after the accident or incident.

Zone 4: 15kms – shelter and stable iodine must be made available within 10 – 12 hours of the accident or incident.

Zone 5: 30kms – shelter and stable iodine from 24 hours after the accident or incident.

All the above is the theory of how the authorities will attempt to minimise the impact of widespread exposure to ionising radiation in the event of an accident which spills radiation outside the plant’s perimeter.  The reality would be entirely different and TASC speculates that any evacuation attempt would end in chaos, gridlocked roads on our country lanes and general panic.

Should there be a notification about an accident at Sizewell, it would be primarily communicated via local radio.  To reach the population, some assumptions have to be made: that people are listening to the radio and that the accident was not sufficiently serious to take down the electricity power supply for the radio transmissions to be made.

Depending on the time of day or night, it is a reasonable assumption that there would be as much traffic trying to get INTO the stricken area as there is trying to get OUT as people collect children at school, partners at work, family members in the area for a number of reasons.

The Emergency Plan to protect residents and people living further afield in the event of a serious accident and release of radioactivity from Sizewell is inadequate under all circumstances.  The presence of a Sizewell C building site next to the ‘B’ plant on which 3000 – 4000 workers would be operating adds a huge additional risk to the people of the area as it would almost double the number of people requiring evacuation from Leiston itself.  In addition, sites for the building of 800 new homes have been identified, further adding to the evacuation burden.

Operators of Sizewell C plan to use fuel which is far hotter and radioactive than the ‘B’ plant as the EPR design relies on longer ‘burn up’ times for its additional power and performance.

The transport infrastructure around the Sizewell site is entirely inadequate for the scale of evacuation required to remove thousands of people in time to avoid large scale contamination.  It could not accommodate such a mass exodus. Siting a nuclear plant on the edge of a community of 5000 people is irresponsible and reckless.

How can we justify exposing people to such risks?  Is this contrary to the provisions of the Human Rights Act? 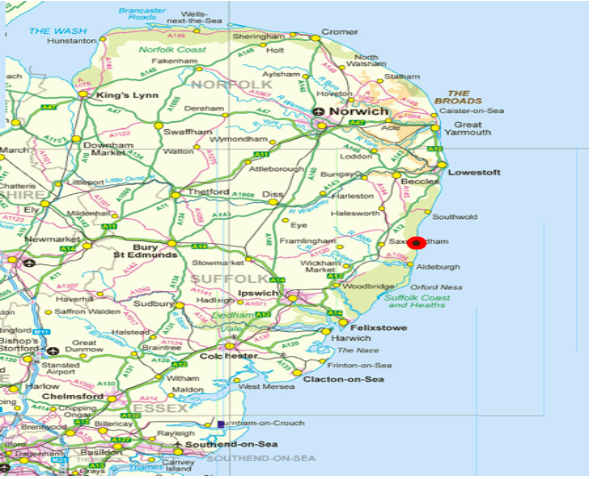 An approximation of the Zone 2 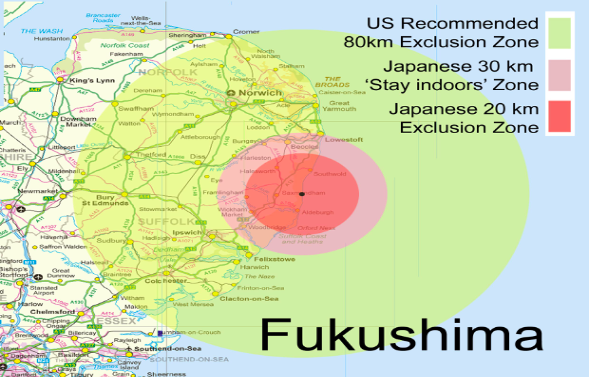 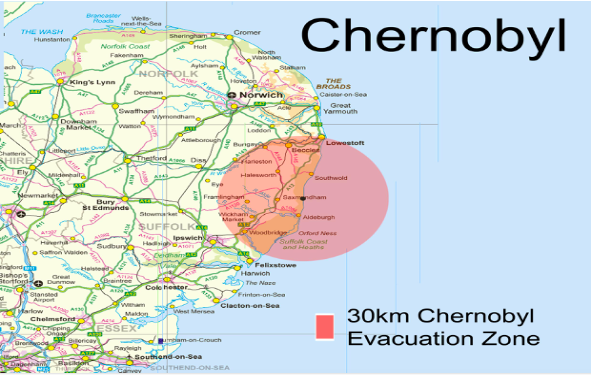